Around the World in 80 Days for SickKids Hospital

Since Jules Verne’s tantalizing novel first introduced us to the concept in 1873, circumnavigating the globe has held a strange allure for the adventurous traveler and those who live vicariously through them. Still, going around the world in 80 days sounds like a pretty daring feat, but when you consider doing it in a single-engine plane, it’s an even taller order. This incredible around the world flight is exactly what flight veteran Dave McElroy and his co-pilot Chris Elgar plan to do to raise funds for SickKids Hospital in Toronto.

Dave has always wanted to fly round the world, but it was only when he visited the SickKids Hospital in Toronto that the motivation really kicked in. SickKids is Canada’s leading children’s hospital and is recognized as one of the world’s foremost pediatric health-care institutions. Dave was particularly touched by the generous community of staff, donors and volunteers who make a profound difference in the lives of patients and the tireless dedication they showed to their little charges.

Dave was at SickKids to support his two grandchildren, Wylie and Finn, who are both Asperger’s kids. SickKids does incredible research at their Centre for Genetic Medicine in Autism Spectrum Disorder (including ASD, Asperger’s syndrome) and Dave was so taken by the dedication of the staff members that he decided it was time to do something to help raise funds for this invaluable research facility.

Today, 1 child in 88 has autism, and as yet there are no known cure for it. Research facilities like those at SickKids help to pull back the shroud and offer parents and children a wealth of resources and assistance. “We’re doing this to raise money for two life-saving charities. My two grandkids have Asperger’s and that’s been a personal inspiration for me. The first time I went to SickKids I was absolutely flabbergasted by the staff, by the facility and by the way that everyone from the janitor to the doctors supported the kids. The atmosphere in that place is amazing; it’s inspiring,” said Dave.

Dave will embark on his around the world in 80 days adventure in a Piper Comanche PA24-180. While Dave has yet to cross an ocean in his little plane, this trip will include three Atlantic crossings, 60 airports, six continents and an incredible 38,000 nautical miles (71,000 km). During the course of their trip, Dave and Chris hope to raise half a million dollars for their two charities.

All of the costs for the trip have already been covered, so donations made in North America go straight to the SickKids Foundation. You can contribute with a private or corporate donation and there are even fly-alongs for sections of the trip where you can keep Dave company for some of his incredible journey. You can also follow their progress on Twitter and Facebook.

Want something else interesting to read? Try this post! 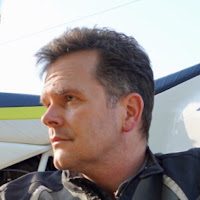 An obsessive entrepreneur, with interests in renewable energy, motorcycles, and carpentry. David and the jib crew employ over 15 years of advertising experience to deliver sound strategies for an ever evolving marketing seascape. Follow David on Twitter @shepdaddy or connect on Google Plus