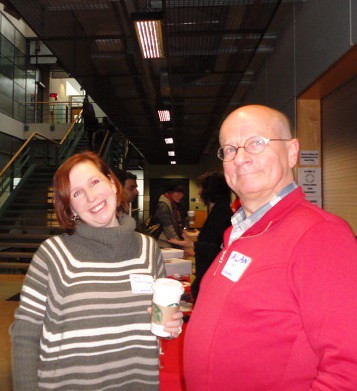 Laurie Dillon-Schalk is someone I’ve known for a while. She’s supportive of me and my work, and has taken time out of her busy life to help me, including giving me a free copy of her LinkedIN opus – you should ask for a copy! A couple years back Laurie took a rocket ship to the top of the advertising world when she signed on with JWT which is a big agency here in Toronto and all over the world.  At this firm she worked on huge jobs including Mazda, Walmart, Sick Kids Foundation, and more. 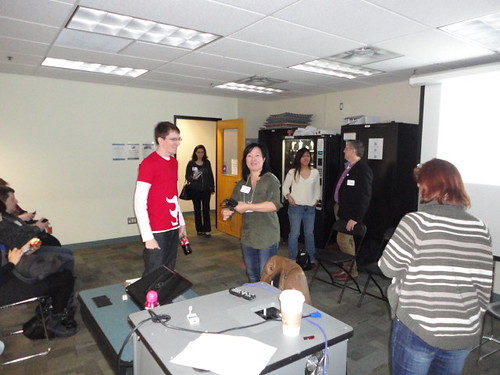 Laurie’s role was to lead social media integration, and in that capacity she  oversaw teams that ran social media planning, listening, communities, and analysis on behalf of brands.  Her roots include traditional brand marketing including P&L, forecasting, consumer insights & planning, category planning, etc.  Now she works at DraftFCB doing God knows what.

When I first met Laurie she was CEO of SocialWisdom.ca with mostly small business clients and one or two premier organizations like Scotiabank Buskerfest which raised her profile and got her speaking gigs around town.

Hessie Jones, CEO of ArC Company was the organizer of one of last year’s most important talks, a panel debating that classic argument Search vs Social.  On Twitter she is @hessiejones Cellist, Strategist, Start-up Junkie, Social media addict, tech geek, marketer.

Andrew Jenkins is a friend of mine and I regret not getting a minute to chat with him privately. I did get to accost him publicly though* see pictures below. Andrew now styles himself as the Emerging Technology Strategist and Chief Strategy Officer at ArC Company. @ajenkins

Randy Matheson, Director, Emerging Media & Technology, at Delvinia is a funny guy. He got the most laughs. His Twitter is good @RandyMatheson

Mark Evans needs no introduction here. He’s the Principal of ME Consulting, famed organizer of MESH, and popular hi-tech reporter with a good reputation. 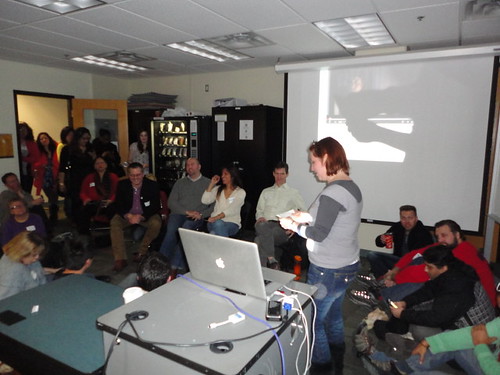 Interactively, Laurie started the session by reading aloud a provocative quote from Mark Evans, “Without storytelling, content is nondescript, uninspiring and, frankly, a waste of time and energy.” The argument was recently published in Forbes magazine. This was the essence of Laurie’s panel exploration.

“Our panel will explore what is at the core of storytelling, what brands must do to unleash their stories and also — how some brands are managing to get their communities to tell the story on their behalf.” wrote Laurie Dillon-Schalk in the session description field.   Reflecting back on the event, I’m not sure Laurie’s panel got to the core of storytelling, but it did impart some valuable social wisdom and I personally got charged with some good ideas. I wrote down some new storytelling platforms.

Laurie moved the session right along quickly into the biggest brand advertising debacle of recent times, the most innovative yet catastrophically under performing TV commercial concept at the recent Superbowl.

Did the car maker Lincoln’s Steer The Script interactive advertising campaign / Superbowl commercial live up to the hype? was it successful in selling Lincoln automobiles? We don’t know, but it seems unlikely.  Now if you don’t know what I’m talking about, just watch the video.  The guy reading the big storybook is named Jimmy Fallon, and he appears like a fairy tale narrator reading aloud the winning story elements as voted by Twitter followers all across America and the world. TV viewers now get to see the highest demand visual ideas produced and presented in the 2013 Super Bowl spot.  Yes, its a good idea on paper…

On a side note, I personally believe this concept would have worked (better) if there were celebrity actors in the car, having the adventure.  Yes I know Jimmy Fallon is a huge web celebrity (although Laurie revealed that a large percentage of his Twitter following is fake or unresponsive), I would have switched him out for TV actors in the car or somehow make these characters into people we actual care about * in my opinion this is the best way to tell an impactful story. One of the tweets displayed in the Twitter stream reads, “don’t expect so much from a community you don’t belong to”.

In contrast, next it was time to look at another vessel. ‘Breathe’ is an example of better storytelling because it has some of the elements of classic paradigm.

This video production has protagonists and antagonists and a sense of conflict – activism on some level is a conflict against authority, and consequently it makes good stories.

Next the crowd began to discuss other places to tell stories. One of the panelists started by saying how storytelling on Facebook has gotten better, and how the platform is evolving to offer rich experiences.

The conversation got really good when panelists began suggesting tools and tactics for advanced storytelling.  Mark Evans reminded people about Scribblelive and that led to a discussion aboutthe anatomy of mash-ups which were extolled by Randy Matheson who revealed that he likes to use Storify.com and there are good stories on Kickstarter.com where people solicit money to fund their dreams. Kickstarter is an interesting storybook, full of modern fairy tales; the website is the World’s most popular crowd sourcing tool where folks tell stories to raise cash for their independently funded projects More great tips here, http://randymatheson.com/my-podcamp-toronto-storytelling-panel-links/

Someone mentioned that Slideshare was a great tool because it takes and displays embedded video so well and someone else said Prezi and … ? Mark Evans reminded the audience that the common everyday old fashioned blog is still one of the best storytelling tools available because its so ubiquitous and malleable. Network43 was discussed. This was some groundbreaking war memorial storytelling done by the British Government. Characters were tweeting and giving updates from a fictional social network in 1943 to show the harsh reality of life in 1943. The piece serves as a grime reminder that war is hell.

[youtube]http://www.youtube.com/watch?v=z75VH8Bg3b8[/youtube]
At one point in the discussion Hessie referenced a ‘fragmentation of the narrative’ as a danger to be avoided. She spoke of this occurrence as being a bad thing, and something to protect against. I believe she was referring to the message being lost or damaged and the value of the story being wasted, but it struck me as counter to my beliefs about encouraging a fragmentation of the narrative so the reader is forced to travel between platforms to absorb different parts in different place and thereby imagine the tale, telling themselves more of the story with every click. This is why I run long sidebars on my blogs to treat visitors to additional story elements and parts of the drama not seen in the original blog post. 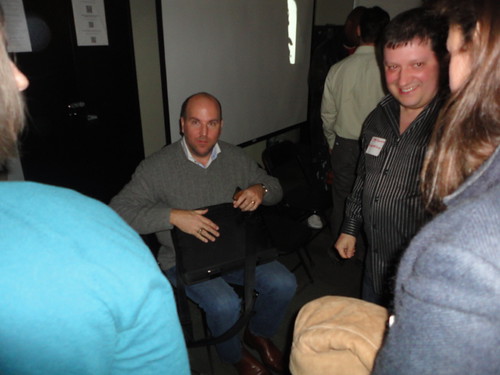 Here is Andrew sitting down when I accosted him after his panel performance by saying, rather loudly,  ‘Oh by all means Andrew, don’t get up’. And so then he got up and came at me, and I thought maybe he was going to wring my neck, 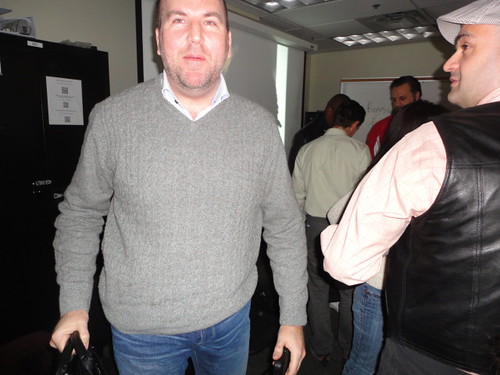 … and this storytelling session would have a little real conflict, for like a skilled web skirmisher I simply snapped his picture and then ducked back into the mass of supplicants.

I have known Andrew a very long time and I believe he was the year behind me at York University Film and Video production program 1990 – 1994, but that training does not appear on his current CV.